SoKnox Studios held another lived-streamed event for the ages on February 18th of this year! This time we had the bands Pale Root and Arden, who both gave two tremendous performances. As always, the pizza was hot, the beer was ice cold, and the music was jammin’! Also, a big shout out to Joe Vangieri, DigiTrax Entertainment’s very own President and CEO, for helping us kick off this monthly event.

To start off the night, we listened to Pale Root as they brought in some chill vibes with a few cover songs and mostly original songs from their latest self titled album, Pale Root. Pale Root is a musical duo of two Knoxville natives, Aaron Freeman and Jordan Burris. Their music is a combination of folk, country, bluegrass, and modern folk Americana. You can check out Pale Root at their website paleroot.com! 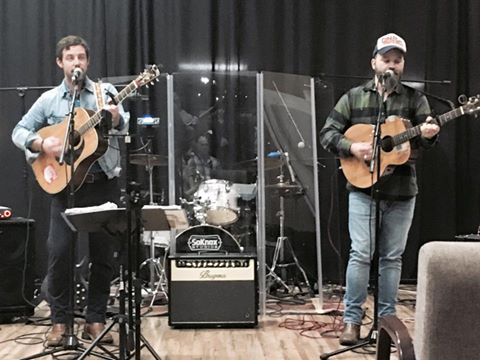 Next up for the night, we had the band Arden come in and they rocked the house! Arden is an alternative jazz rock band originally from Duncan, South Carolina. The band is made up of Alex Rickett, Zach Alling, and SoKnox Studio’s very own intern, Joshua Hoffman. This musical trio are all friends who met in high school and one day decided to mix all of their musical talents and start a band! Stay tuned for Arden’s upcoming album, Arden – Life In 3D. You can check out Arden at http://ardenmusicgroup.bandcamp.com/releases. Despite having made records with more substantial subject matter, eastern textures, and experimental production on their previous two records “Rubber Soul” and “Revolver,” the Beatles were still largely seen solely as the divinely charming pop-performers of the English world. They carried the images of uninhibited fun, youthful energy, cheap-sentiment, and teenage love.

These images along with their compelling personalities were limiting them artistically and these images are why the Beatles’ fans prior to “Rubber Soul” listened. Their fans for a large part wanted to be entertained; they didn’t want to have to critically interpret a work of art. In June 1967, the world’s most powerful POP group would deliver a record devoid of any pop sensibilities altogether; they would deliver a work of art, and art solely.